An accidental, spontaneous pregnancy is one of the more unexpected of middle-aged surprises.

Occasionally choosing Radio National over 4ZZZ radio. Navigating friends’ separations. Having to give up short shorts. These things are expected.

Peeing on a stick and finding two red lines? Not so expected.

I will be 44 when this baby is born in August or September 2014. I write that now, because if you knew me, you would have already asked. Want to know how many people, when I tell them I’m pregnant, ask:

Which is weird. I don’t hear people ask these things of 20-somethings. I don’t remember them asking me when I was pregnant with either of my sons in my 30s.

Anyway. It’s funny. Another transgression of manners to add to the ones I’ll surely face as an “elderly multigravida“.

So this is a blog for those interested in what happens around an ancient breeder, an old, third-time mother. I will try to avoid the fussy conventions of mummyblogs. (Feel free to comment if I’m sailing too close to the mummyblog wind. God help us if I do, but let’s blame it on the hormones.) 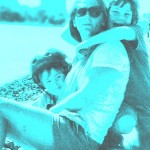 I’m a mother of three boys, living with their daddyo in Queensland, Australia.